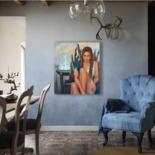 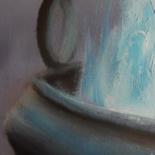 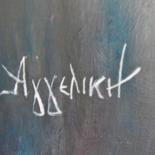 'Pythia The Oracle" is part of the "A World Beyond" series, which is about myths, folklore, concepts and fairytales. Knowledge lost in the depths of time and modern science's persistent and permanent noise. But every now and then, sparkles emerge from the human gene memory, making people wondering for hidden truths.

The Pythia was the name of the high priestess of the Temple of Apollo at Delphi who also served as the oracle, commonly known as the Oracle of Delphi.

The Pythia was established at the latest in the 8th century BC, and was widely credited for her prophecies inspired by being filled by the spirit of the god in this case Apollo. The Pythian priestess emerged pre-eminent by the end of 7th century BC and would continue to be consulted until the 4th century AD. During this period the Delphic Oracle was the most prestigious and authoritative oracle among the Greeks, and she was without doubt the most powerful woman of the classical world. The oracle is one of the best-documented religious institutions of the classical Greeks. Authors who mention the oracle include Aeschylus, Aristotle, Clement of Alexandria, Diodorus, Diogenes, Euripides, Herodotus, Julian, Justin, Livy, Lucan, Nepos, Ovid, Pausanias, Pindar, Plato, Plutarch, Sophocles, Strabo, Thucydides and Xenophon.
One of the main stories claimed that the Pythia delivered oracles in a frenzied state induced by vapours rising from a chasm in the rock, and that she spoke gibberish which priests interpreted as the enigmatic prophecies and turned them into poetic dactylic hexameters preserved in Greek literature.


Additional info:
 Varnished, on stretched canvas
 Original, signed and ships with a Certificate of authenticity.
 Ready to hang -doesn't need frame (it would look great though).
- Price includes shipping cost. Please note though, that orders shipped internationally may pass through customs and are subject to import duties, taxes, and custom processing fees (determined by the country the artwork is being shipped to) that are NOT included in the price above and are NOT connected with the seller. The buyer is responsible for the payment of these additional fees, so please check with your country's customs office to determine what these additional costs will be prior to making a purchase.
- Ships professionally packaged in cardboard box in 5-7 business days. An order to Greece and EU countries, ships in 1-3 bussiness days.
To everywhere else, I need permission from National Gallery of Greece, so I'll need approximately 5-6 bussiness days to prepare all necessary documents.
- Tracking number provided.
- For 2 or more paintings, please contact me for a special deal.